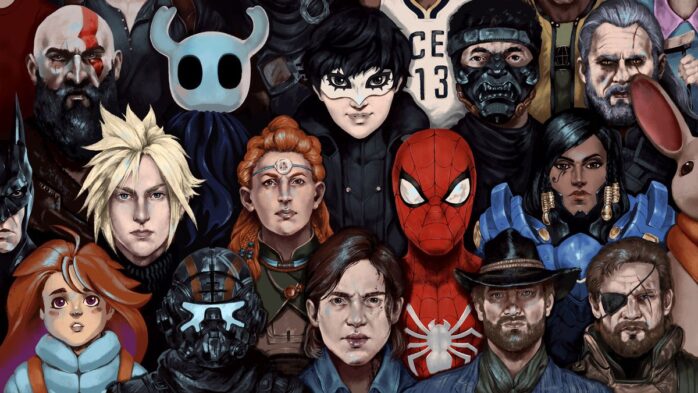 For decades, slot-game developers have managed to incorporate  every popular game theme into their games.They have targeted every  From movie titles like Jurassic Park and Indiana Jones to sports-related titles such as the Dallas Cowboys-themed slot machine—every aspect of the entertainment industry is covered in the slots industry. And the video game niche is no different.

Mario, Lara Croft, and even your favorite Street Fighter characters have graced the screens of both slot machines and online video slot games in recent years. Here are some of the best of those titles, popularized by the legal online casino industry.

Tomb Raider is an online slot game that was created by game development studio Microgaming. Yes, it features Lara Croft as you’d expect and all the symbols that you remember from the actual video games. It’s a simple 5 reel, 15 payline slot that has proven to be a massive hit with online gamblers.

In fact, it was such a hit when it first came out that the reviewers at NewNoDepositCasino.co.uk — a site that reviews online casino games — rated it their #1 online slot.

Slots developers aren’t well-known for dabbling in horror of any kind so it was a welcome change from the norm when Resident Evil hit the casino floors as a live slot machine. The Umbrella Corporation-themed slot machine was such a big hit that it is now an online slot developed by Skywind Group.

Everything you can remember from the game franchise appears in this slot including eerie sound effects to creep players out. The online slot doesn’t quite have the same appeal as the casino floor slot, but it still impresses.

For many gamers Call of Duty is the video game of the century. So when Cryptologic Software developed an online slot based on Call of Duty 4: Modern Warfare, it was always going to be an instant hit.

Like Tomb Raider, this is a super simple slot with five reels and 25 paylines. It’s a non-progressive slot game but boasts a winning jackpot of an impressive $100,000. And like most other video game themed slots, you’ll see all the usual in-game imagery represented in the symbols while there’s a nifty landmine feature that adds that extra level of excitement to the game.

Gamers of a certain age will remember spending hours on end punching combos into a SNES controller trying to complete Street Fighter II. It’s an all-time classic so it’s no surprise that NetEnt studio decided to create an online slot based on the game.

The developer went all out to gamify this slot and even went so far as to give players the option to choose a character and fight an opponent. Win the fight and the player gets Beat the Boss free spins. There are even four boss levels in this slot making it a title that is as close to the original as any slot on this list.

READ MORE:  Study Examines the Effects That Video Games Have on Our Brains

Okay, so this is one that we just wanted to shoehorn in as it’s not a conventional slot game like those mentioned above.

Mario Slot is a single-player minigame that appeared in Super Mario 64 DS and was a huge hit with players. It was a super simple slot with three spinning wheels that cost one coin to spin. This was slightly different to regular slots as you had to touch each wheel to stop it spinning so you had the illusion of being in control of the game. A line of three matching symbols saw you win extra coins as would a single Superstar symbol

This slot is as simple as it gets, but it just has to go on the list because it’s Mario.

Zuma is a puzzle game which is full of excitement, it is one of the most popular games back in the days, the game was basically based on azaetic theme. The game has tons of levels to play and makes it more adventurous. Nowadays there are lots of slot machine games that are easily available in the market and you can get the best experience at the same time. The slot machine game offers the exact same symbol as the actual game, so the players get the same chills as they feel when they play an actual zuma game. It has five wheels and twenty pay lines which is very common nowadays to find in any of the slot machine games in the market. In order to win the game and earn an exciting bonus, the player needs to match all the five reels with the same color.

Space invaders game was a worldwide success at that time and was very popular among the young generations. It is one of the best classic arcade’s games which was based on space fight. Aliens from space came to attack our peaceful green planet, while each of the aliens came with different sizes and powers. Slot machine games based on space invaders theme have five reels and 10 fixed playlines with the modern sound and best animations. Slot machines even have the same buttons to control the game and from setting the best strategy. In order to win a game the player has to have 3 aliens of the same color to earn a bonus feature. It also included another version which is shooting where a move turns icons into wilds. Players can also play some extra spins in order to win an exciting bonus.

This game is very popular among the young generations.There are more than one versions of the Lara Croft aka Tomb Raider slot machines games present in the market. The theme of this slot game was acquired from the ancient temple or tomb to find a hidden treasure and gems. To make it more interesting the slot games developers have carved the exact symbols and logos on the button. Within catacombs in this slot game inspired by an iconic character, you can find no less than three jackpots here; the Mini, Minor, and Major respectively pay 15x, 100x, and 5000x your stake. The book of Lara is the Scatter awarding 8 spins for each winning way so that you can eventually play 80 hands without paying a dime. Thanks to multiplier blocks, all Rolling Reels winners will be boosted 3x, 6x, 9x, or 15x.

READ MORE:  What Is DACore.exe? Is It A Virus Or Malware? Uninstall or Fix?

The above slot games, which have discussed, are the best slot games present in the market. These games are the most famous games among the childrens at that time. Moreover, they combine thrill and a solid likelihood for victory in their fundamental setup. Whoever plays these games nowadays in the slot machine are guaranteed that they will feel connected and could go on to play for hours. If you have not tried any of the above slot games, what are you waiting for?